Rapport is a sense of connection, acceptance and openness between people; which allows communication to happen on a far subtler, automatic level.

It is useful in a number of situations :

How to increase rapport

Rapport is about being ‘like’ or ‘similar’ to someone. It’s difficult to fake rapport (we tend to notice and it creates exactly the opposite effect.)

However, we can encourage it if we:

The dangers of too much rapport

Whilst in rapport with someone, it is very easy to get the impression that we understand what they are talking about on a logical level, but this might not be the case. We have to take some time to check this understanding.

To establish rapport we want to use similar words to our client. Using different words, that is to paraphrase using our own language, goes some way to damaging rapport – but this is necessary in clarifying what they mean to us.

Good practice is to establish rapport first by using our client’s language and then gaining agreement to check understanding by using our own words.

The One Sentence Persuasion Course – 27 Words to Make the World Do Your Bidding, Kindle Edition

How can a cult leader convince someone to fly a plane into a building, killing themselves and many others,  whereas a coach can’t convince their client to loose weight and have have a longer, happier life? What is going on? Blair Warren’s short book suggests some answers, and it relates to rapport.

The one sentence referred to in the book is “People will do anything for those who encourage their dreams, justify their failures, allay their fears, confirm their suspicions and help them throw rocks at their enemies.” We need to ‘validate and encourage‘ before we attempt to ‘Correct and convince‘, how many times do we ‘Correct and convince’, and are then surprised we simply get ‘push-back’. A similar to concept to pace first, then lead.

The One Sentence Persuasion Course – 27 Words to Make the World Do Your Bidding, Kindle Edition 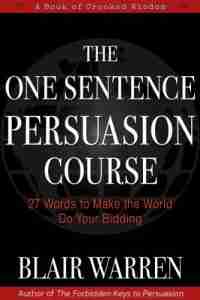 In this video, Michael explains why rapport matters.

In the next section we ask: Where are you now? And explore the Meta Model.

"I've trained with Michael on his NLP courses and also worked with him as a business coach for over a decade.

I thoroughly recommend him and Business NLP Ltd as an excellent provider of business-focused 1:1 NLP training and coaching services."

"I met Michael on one of his NLP courses about 10 years ago. The course was life-changing and I stayed in touch.

Since then I have seen him work with all manner of people, and seen them grow and progress as they learn about themselves through his coaching. I recommend NLP and coaching to anyone who wants to effect a change in their work or personal lives."

"Working with Michael Beale to become an NLP Practitioner has been an incredible experience!

Why is his course so awesome?

Michael will coach you to coach others - meta, I know, but that's why it works so well! We had weekly/biweekly Skype calls to discuss new concepts and then I worked to apply those concepts in the real world before our next meeting.

I've learned so much over the past six months due to this learning model and plan to take more courses with Michael in the future!"

"I have worked with Michael in many situations where his creative approach to getting the most from the team he is coaching adds to both their business skills and personal capabilities.

Everyone feels an individual, a key requirement in building trust and confidence. His relaxed, yet highly motivational, expertise in building a change culture is superb"