How can we change beliefs?

As well as a belief being useful or not, the degree that we believe it makes a difference. It’s useful to believe some things with absolute certainty.

This is an effective belief change exercise where you step into an imaginary circle on the floor, as you step into the circle you imagine having a really useful belief and imagine what changes, however small, when you have that belief.

If you’re not sure what might be a useful belief, use one of the NLP presuppositions above. For example, try Feedback is always useful.

What would change if you really believed it was true?

If is often useful to complete the exercise separately with all the NLP Presuppositions above.

What would you do differently in the future is you held one of these more useful beliefs? Imaging yourself doing it at an appropriate time in the future.

This exercise explores how we represent beliefs differently based on how strongly we believe (or disbelieve) them.

First, we need to decide on three beliefs.

We then identify how we represent each belief. What are the pictures, sounds and feelings associated with that belief? What are the qualities (see submodalities) of each belief?

For example, let’s take the belief I love chocolate fudge sundaes. When exploring any images associated with this belief I might ask:

We’ll then ‘snap’ it into the representation of the belief we strongly believe in. As we do this, we’ll start believing it more.

Write down 5 beliefs that you hold with absolute certainty. They can be very simple, for example I love my dog, I really like ice cream, the world is round. This is a useful warm up exercise exercise to remind us how we represent strong beliefs.

Read through the NLP presuppositions, which appear above. Choose two that would be useful to believe strongly. Mentally rehearse what it would be like being certain about them in the future. Play a short movie in your head of what it might be like. What changes for you?

Think of any limiting beliefs you may have. Choose the most limiting. What would it be more useful to believe? Run through the submodality exercise above.

In the next section we look at Perceptual positions. 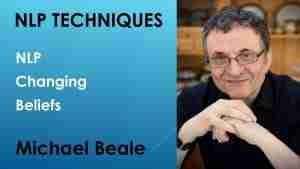 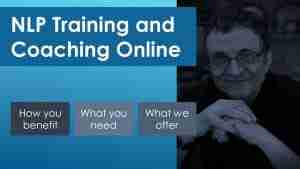